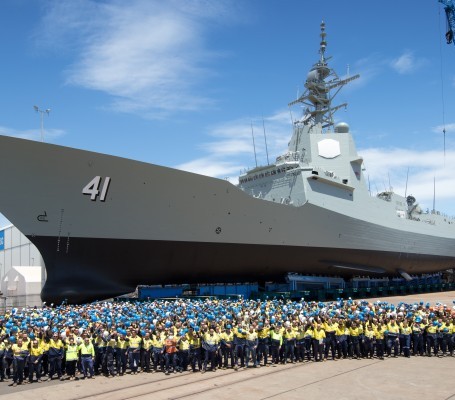 ASC Chief Executive Officer and Managing Director Stuart Whiley said ASC, as lead platform shipbuilder for the program since its inception in 2005, was enormously proud of helping deliver the final warship of the three-ship program.

“To the more than 1,700 shipbuilding employees who worked on this program for us, peaking in 2015, along with the hundreds of contractors, I say a big ‘thank you’,” Mr Whiley said.

“ASC is incredibly proud of all the shipbuilders responsible for the construction of the Sydney, their skill, resilience and hard work, over more than a decade of a highly challenging program.”

“In terms of ASC’s history, today compares only to the delivery of the sixth and final Collins Class submarine, the Rankin, achieved in 2003, also at the Osborne Naval shipyard.”

“With the AWD program, our shipbuilders proved that sovereign Australian shipbuilding could deliver world-leading warship platforms at increasing productivity levels, while supporting project partners within the Alliance.

“The Sydney, like the two AWDs which preceded her, HMA Ships Hobart and Brisbane, are the Navy’s most complex and potent warships and will be critical for RAN force protection and naval power projection in the Indo-Pacific for decades to come.

“It is pleasing to note, also, the role ASC’s shipbuilders played in completing the aviation upgrade to the Sydney in recent months, along with our Alliance partners, making her the most up-to-date AWD in the fleet, from a platform point of view.”

While speaking briefly at the ceremony, Mr Whiley wished all of Sydney’s future crews well.

“Central to everything ASC does is the safety of our workforce and those who sail on the warships and submarines we deliver. Wherever Sydney sails, in friendly or not-so-friendly waters, she goes with the best wishes for a safe return from everyone who helped construct her.

ASC was selected in 2005 as the lead shipbuilder for the AWD program, following a competitive process. ASC worked with shipyards in Melbourne, Newcastle and Spain to build ship blocks, and consolidated the blocks at the Osborne Naval Shipyard. ASC worked as part of the AWD Alliance, along with combat system integrator Raytheon Australia and the Department of Defence’s Capability Acquisition and Sustainment Group – joined in 2015 by the warship’s designer, Navantia.

The first AWD, Hobart, was delivered to the Government in 2017 and the second, Brisbane, in 2018. Both have since been commissioned into the Royal Australian Navy and have been met with widespread praise.