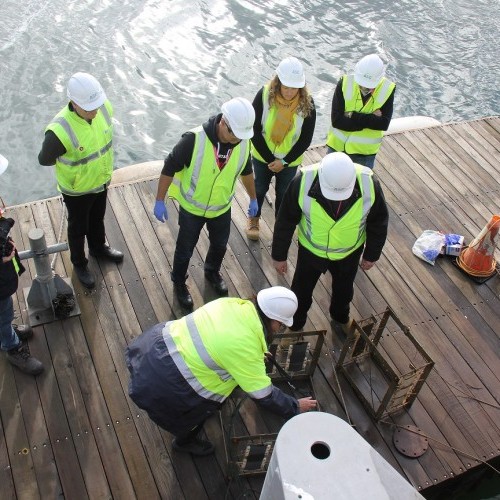 Real-world experiments point to smooth operations for ships and submarines

Experiments at ASC’s deep submarine maintenance facility in Adelaide have shown a new type of surface coating can eliminate marine bio-fouling, or sea organism growth, on the hulls of naval vessels and other submerged surfaces.

The research, led by experts from Flinders University with partners ASC, the University of South Australia and the Department of Defence, is funded by the South Australian Defence Innovation Partnership program and aims to develop practical applications that could end the scourge of marine bio-fouling, which costs billions each year worldwide.

“Our tests have shown that fouling can be significantly reduced and, in some cases, completely eliminated on surfaces that are coated with a conducting paint, and subject to electrochemical stress,” said Professor Andersson.

“To be honest, we are surprised that it works so well. As far as we know, there isn’t a lot of this research being done around the world and while our research is specific to the Port River in Adelaide, it could be applied to any surface that is submerged in the ocean.”

The so called ‘active anti-fouling’ experiments have tested a range of materials, coatings and electrical cycles, comparing them against non-electrically stressed samples.

ASC, which maintains and upgrades Australia’s Collins Class submarine fleet, is supporting the innovative research by providing advice, laboratory and wharf facilities for submerging the samples.

“Warships and submarines use sea water in the cooling systems of propulsion and weapons systems – even air conditioning. Making sure the inlet valves, which let that water in, don’t become clogged with marine life, is a priority,” said Mr Johansson.

“This research could lead to protecting various parts of the Collins Class submarine hulls, leading to fewer interruptions to naval operations and less maintenance.”

It has been estimated that clearing marine bio-fouling costs billions of dollars each year for shipping companies and navies worldwide. A fully developed ‘biofouling community’ growing on a ship’s hull, can cause up to 40 per cent more fuel consumption, due to the additional hull drag and poor manoeuvrability.

The Defence Innovation Partnership has activated promising innovations in South Australia’s defence sector since 2018. The program received almost $10 million in additional funding, over the next four years, in the South Australian budget in June this year.

Researchers from the University of South Australia are providing expert advice and samples for coating materials.

Pictured below are members of the research team from ASC and Flinders University, examining the samples on ASC’s Port River wharf.